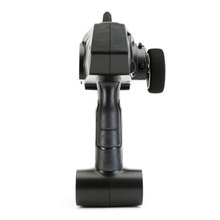 The DX4C DSMR™ 4-Channel AVC™ surface radio system puts the precision of a programmable 2.4GHz radio and the amazing stability of AVC (Active Vehicle Control™) technology well within the reach of the most budget conscious driver.

The DX4C DSMR™ 4-Channel AVC™ surface radio system puts the precision of a programmable 2.4GHz radio and the amazing stability of Patented* AVC (Active Vehicle Control™) technology well within the reach of the most budget conscious driver.

About the SRS4210 AVC Receiver
The Spektrum SRS4210 combines the superb range and signal of security of a 4-channel DSMR receiver with patent-pending AVC technology in a single, compact unit. It’s waterproof too. When you’re driving, the built-in AVC technology calculates your vehicle’s attitude many times per second and makes instantaneous corrections to steering and throttle so it stays precisely on the trajectory you command. The amount of steering and throttle stability provided can be adjusted with the transmitter to suit your skill level or driving style.

Best of all, driving with AVC technology feels completely natural. There is no lag in response or limits on your control. You simply feel like you’re driving a finely tuned vehicle that handles beautifully at every speed.