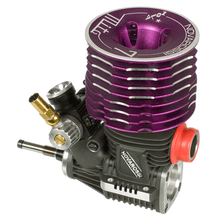 This is the all new Novarossi Mito .21 7-Port Off-Road Engine (Tuned) (Ceramic) (Prerun). Novarossi's engines offer their patented shifted carburetor that has a better mixture flow through the crankcase for improved fuel efficiency and an optimized power curve. Also new are updated rear ball bearings for reduced rotating masses and an improved mixture flow inside the engine which relates to increased throttle response and higher top speeds. A redesigned 3-needle carburettor for improved idle characteristics and an improved return to lower RPM when coming from the upper ranges of the RPM spectrum. This engine has been partially run in at the factory.

The new ball bearing reduces the inertia of the rotating masses and increases the engine's scavenging. You can see both the ball bearing and the manufacturing process result in the picture. These novelties give an increased throttle response and a higer top speed.

The carburettor of this engine is made from plastic and in "reverse" style and has a sliding throttle valve. The new three tuning needles gives a better idle and improves the ability of the engine to return to low rpm after throttling.

The shifted carburetor grants a better mixture flow inside through the crankase's intake. This gives the engine an improved fuel efficiency and a better power curve.