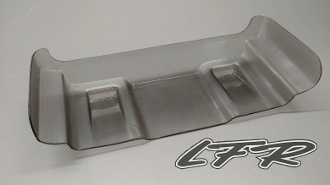 LFR prepares for battle and adds a little twist to their existing 1/10 Tactic wing! By working with the same smoke material used for their 1/8 lexan Hammer wing, the result was a stunning looking wing, that provided unmatched durability on the track. Weighing in at a modest 20 grams, the new smoke wing is only 5 grams heavier than it's original brethren. The wing is sold individually and comes pre cut. The innovative "one of a kind" vents can also be cut out for additional tuning and performance. The new smoke 1/10 Tactic wing may just be the wing modified racers and weekend warrior's have been looking for. Only time will tell; and chances are, racers are going to get a lot of use from it before it's time is up!