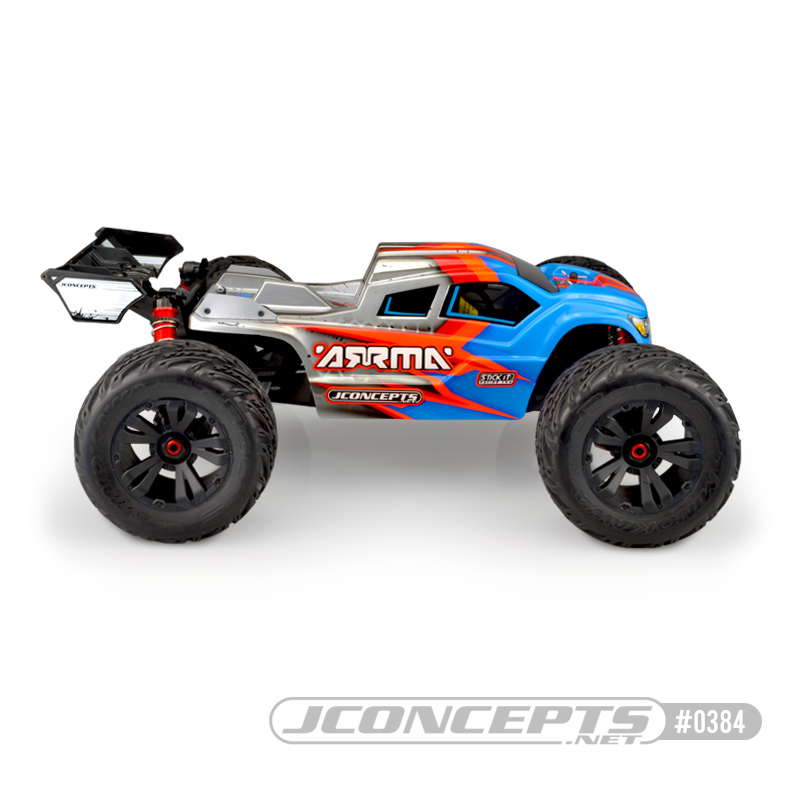 The new Finnisher for the Kraton BLX polishes off an already beastly truck. The Finnisher is a proven winner on the race track, but its appeal on and off the racing line makes it perfect for the ultimate speed-run and basher vehicle. Simply put, the Arrma Kraton is a beast of a truggy, its top-speed rivals the fastest vehicles in RC and JConcepts now has a Finnisher body ready to compliment this agile vehicle.

The #0384 body incorporates pre-dimpled locations for one of the quickest bashers on the circuit. The slight cab forward, raked windshield and aggressive stance highlight a performance oriented core. A wide front hood scoop allows plenty of clearance for the unique Kraton shock geometry. The body incorporates a large center fin which begins on the roof line and finishes just past the half-way point on the bed.  Extended front chin spoiler, headlight and grill protect the front-end from unwanted up-drafts during flight while the supplied decals stand-out like an 18 wheeler.

The Finnisher has a built-in air escape passage on the roof which allows the customer to fine-tune the body for maximum outdoor performance. The new body includes champion rear name plates which provide additional high-speed stability and improved positioning of the rear bed rails to strengthen the assembly. Overall handling has been improved by balancing the bias between the cab location and rear wing placement which control the majority of the aero affects of the aggressively styled body. Finnish the competition with JConcepts – World Proven Innovation and Design.