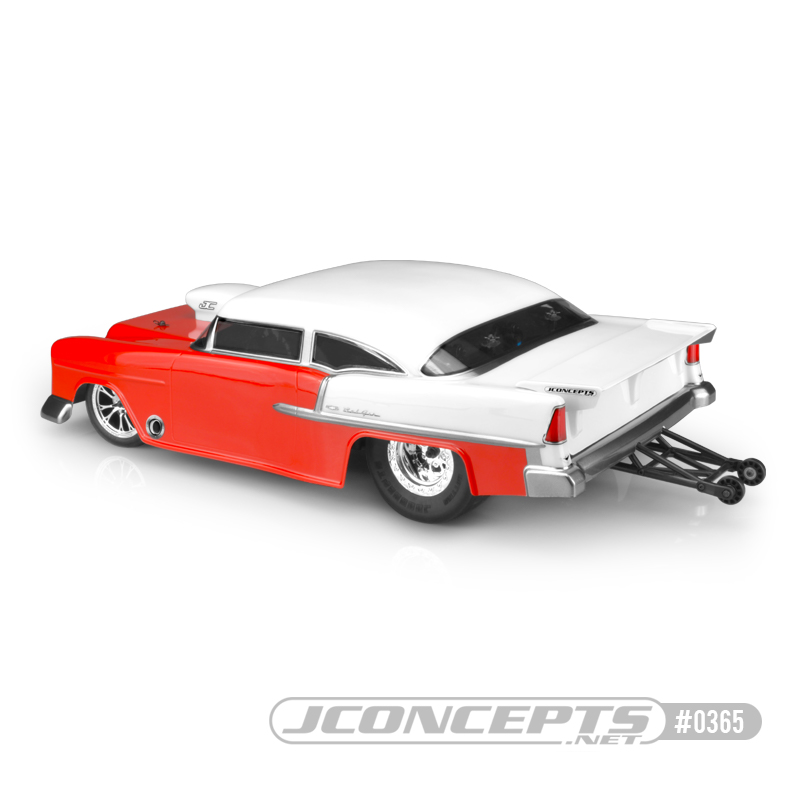 Since the late 1980s the 1955 Bel Air body has been an icon of fast door slammer racing since it first appeared on the scene. A decade ago the body style was refined to an even more radical updated version of the classic American icon for modern day 240 + mph pro modified use. With a nudge from drag racing enthusiasts, JConcepts has unveiled one of the most classy looking vehicles to the Drag Eliminator scene.

Taking on this project was not an effortless task, doing a great deal of R&D, the team went for the more race inspired style and decided to split up the design into 3 different parts. First, the main Bel Air shell has been carefully crafted via CAD and hand shaped and finish to realize the many details found on the 1955. The stunning looks, slightly modified for drag racing, create a low-profile build, racy, laid-back front grille and unmistakable front headlight section.

JConcepts has designed the entire race body with the shoebox look as it was called in the 50’s. Along with the flatter straighter panels, the '55 also has modern cues like wrap-around glass on the windshield, and tail lights that jut outward. The body shell has built-in trim along the main panels which can be painted and detailed by the user to emulate the real steel. In the rear, the drop-dome roof glides toward the trunk deck which allows the 2-piece spoiler package to drop into place.

Sculpted and abbreviated (race-style) bumpers are molded with the body and just like all the rest, can be painted as desired. The front hood-scoop is a separate polycarbonate piece which has a special form just to under-cut and look the size and shape as a 1:1 counterpart. Slight fender flares give the user a hint of trimming direction for the 13” wheelbase and wheel well openings. The trim lines throughout the body provide a low-profile appearance and steady guide for a clean overall look.

Included in each body set, a 1955 Chevy Bel Air decal sheet, rear wing option including lower support and upper wing spoiler and the paint mask for all windows. A front hood-scoop is also part of each body set and ready for trim, fit and finishing. As always, each body set is backed with JConcepts customer support and racing heritage.

Notes from the team –

The rear wing consists of two pieces, the lower section is designed with an L-shape with support ribs which require double-sided tape (not included) to attach to the back of the trunk lid. Once base is attached, apply more double-sided tape to match locations on the top wing and drop the main wing down into place. The hood-scoop is also applied with double-sided tape and it can be applied by installing 1 small strip of tape on both sides of the scoop. To finish, flex the scoop out and drop down and press firmly against tape. Photos show body mounted on Team Associated DR10.

The Chevy Bel Air measures a 13.00" wheelbase and the inside dimensions of the body are 11.25" wide front and 12.00" rear. The body is built for a 2wd SCT wheelbase length and narrowed to more resemble the original 1:1 counterpart. It's helpful to plan your build, take measurements and modify your platform to fit inside the boundaries of the Chevy body.

Chevrolet and nameplates are registered trademarks owned and licensed by Chevrolet.
Manufactured by JConcepts, Inc.